4G from Tcell - more than a year in the network!

A little over a year ago, in April 2014, a grand event for Tajikistan took place - the commercial launch of the fourth generation mobile communication - 4G network. Then, in the presence of journalists and bloggers, Chief Executor of the company - Mansur Khamidov and President of TeliaSonera Eurasia, Eric Halberg, amicably and solemnly "activated" 4G with a symbolic purple “Start button”. 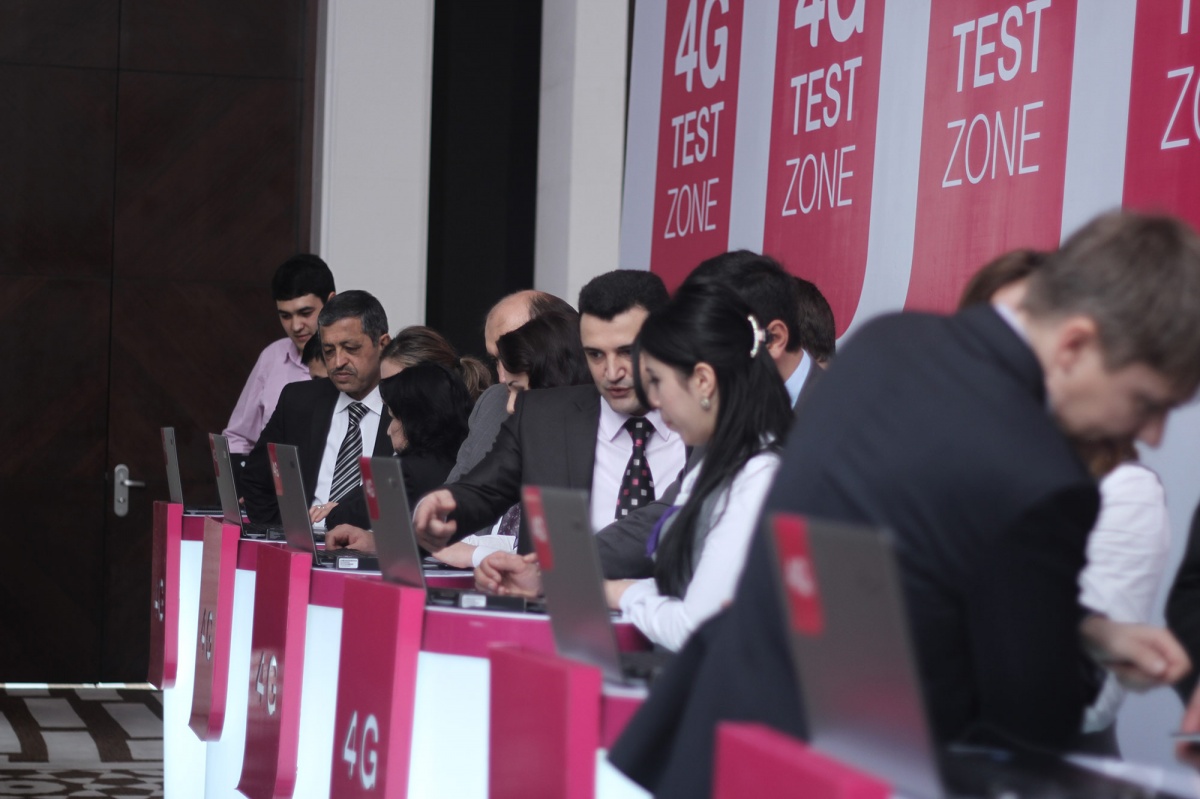 Since then, much has changed: the 4G network has gained thousands of dedicated subscribers across Tajikistan, the range of devices supporting the 4G standard has expanded, the coverage area has been strengthened and expanded.


Coverage Area
On April 15, 2014, within the territory of Tajikistan, coverage of the 4G LTE network covered the territory of the cities of Dushanbe, Khujand, Chkalovsk, Kairakkum and B.Gafurov. Now they added two more cities - Tursunzade and Kurgan-Tube.


And since June 2015 - additional 28% capacity was added by installing new 4G LTE Band 20 base stations, to strengthen and improve the speed of your 4G Internet! Now the connection of 4G in these regions is even more reliable and faster!
In December 2017, high-speed Internet 4G became available for residents of Nurek. 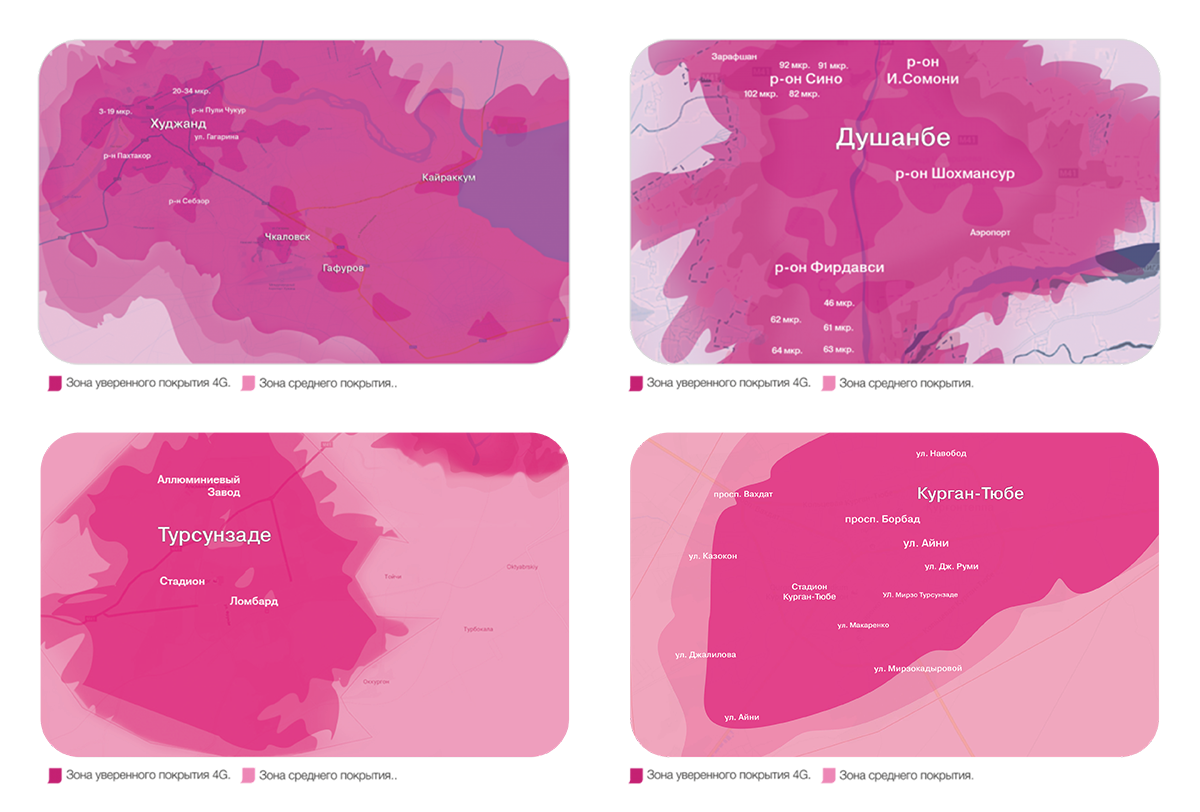 But Tcell is not going to stop there. The plans are to cover the whole territory of our country with a 4G network. Very soon 4G will appear in other large cities of Tajikistan.

Tariffs and devices
At the time of the launch of the network, Tcell could offer subscribers only two types of devices that supported the 4G standard: USB-modem and WiFi-router.

Today, the company offers subscribers a wide variety of choice that support for the 4G network. This is a 4G USB modem Huawei E3372, 4G WiFi router ZTE MF253.

In the network of Tajset stores, subscribers can purchase smartphones and tablets that support the 4G network, while receiving additional bonus packages of minutes and Mb from Tcell.

Specifically for users of the 4G network, two tariff lines have been developed: «Интернет 4G 2016» и «Безлимит 4G 2016». And more recently, using the fourth generation of communication has become even easier: owners of smartphones with support for 4G network can take full advantage of high-speed Internet by connecting one of the Internet Options G, to which the LTE network is now automatically connected.

Opportunities
The modern world is moving and changing every second. The mobile Internet consumption profile is also changing. Now it's not enough to just look at the pictures, view the social networking activity, read the long and boring texts. We want an instant and lightning-fast download of video content: movies, movies, in high definition. LTE technology is becoming increasingly popular among mobile Internet users around the world. Users migrate from the standards of the second and third generations in 4G, getting better speeds. 4G-network (or LTE) is a mobile Internet at a speed 5 times higher than 3G. It is not inferior to the usual wired Internet or Wi-Fi: loading pages, files, music, video, games and applications takes place in seconds.


Using the 4G network, you can unleash your potential: communicate, watch movies and listen to music online. When buying 4G modem or 4G router and connecting the tariff plan “Internet 4G 2016” - Tcell gives traffic packages for watching video content in high quality from the special internal portals: namba.tj and megogo.net as added bonus. These portals have a huge number of movies, TV shows, TV series, music and much more.

The maximum download speed can reach up to 50 Mbps. The average speed for the user can be lower and depends on a number of factors:

Target group
Before launching the 4G network, the company provided some popular bloggers, journalists and activists with 4G modems for testing. Testers of 4G modems from Tcell positively assessed the speed and quality of 4G Internet: “I think that over time the coverage area of Tcell will only expand. At the moment, when this service is just being introduced, the most promising users for the company can be not only residents of the above cities, but mostly legal entities.” wrote one of the bloggers on his page.

A year later, when the audience using the 4G network increased from zero to several thousand and work is underway to expand and strengthen the network, it can be said that predictions are coming true.
Today almost everyone can enjoy the standard network: young people prefer mobility and speed; family - for warm amicable evenings with films; customers of the company, large corporate clients - for reliability and quick response to environmental factors.
Student Firuz Karimzoda says: “I have a smartphone that supports 4G network. It's very convenient and fast: I can find the right information for study, communicate with friends on social networks, always stay connected, view news feeds and videos right away.”
Jamila, a housewife and a young mother, says: “My daughter is constantly asks for new cartoons. We bought a 4G home router from Tcell, now it is at the disposal of the daughter - huge portals with thousands of cartoons that are loaded very quickly and do not give us or her boredom.”
Andrey Faizrakhmanov, director of Faberlic LLC in Tajikistan, shares his impressions: “When the full 4G connection in Tajikistan came, we immediately bought it in both our offices. We are satisfied with the quality, and we will continue to use this network. "

4G in Tajikistan - the phenomenon is quite new, and only begins to develop. We are glad that we are at the beginning of this moment and we are not going to stop there. 4G from Tcell - the future is here!

Stay informed about every event!
Tcell News and Press releases are here.

If you have questions please address them to online support service